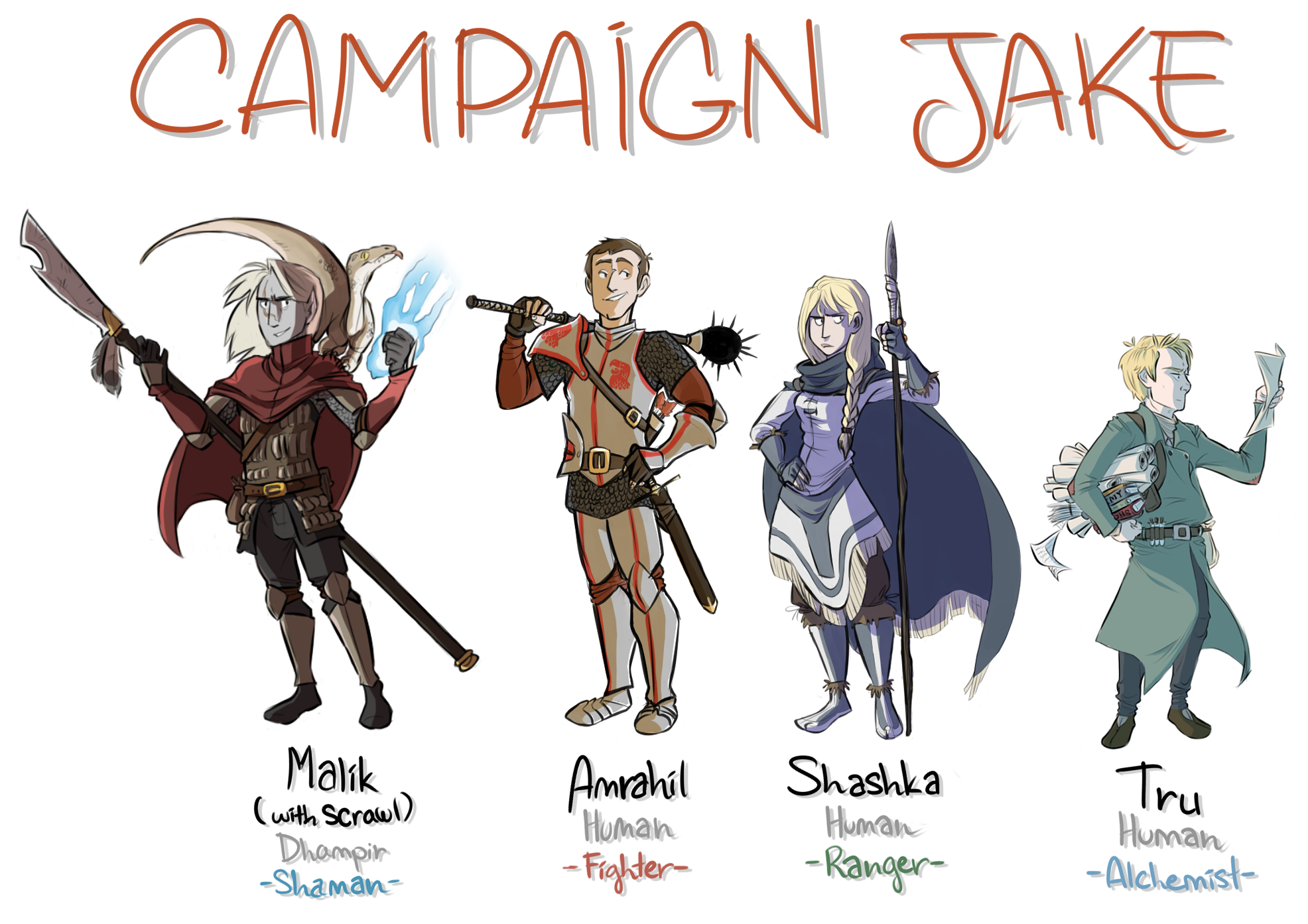 It is told by sailors and explorers the sandy-white shores of Jake glisten with crystalline beauty like no other. The warm, teal-green ocean water cannot be found anywhere else on Earthe, while towering cliffs of orichalcum are said to scatter the coast. Yet, little is known of Jake from outside the land as its inhabitants travel not across the seas. Sailing merchants and military vessels are of the few to come and go from the ports of Jake where only special permission may grant access. Those who do set foot in Jake are restricted venture not beyond the docks and are carefully watched. The exclusive nature of the land is attributed by the majority of outsiders to the Sophia Ultima Accords, a treaty established by the first queen of Faern, Sophia III.

Coming from outside Jake, you would know very little about the place. Because of it's inclusive nature, most information that is in Jake stays in Jake. Formal education in Mavotica and Oathhome would include basic observations such as the prominent Sophia Ultima Accords as well as trade deals and general geography. It is unlikely you would have ever met another person from Jake for its people seldom leave, but if you did, you wouldn't have realized it. It is known, however, that a number of the rulers of Jake's seven kingdoms do communicate and occasionally meet with rulers in Mavotica and Oathhome to retain a relationship with the rest of the world.

Mavotica:
~Overview~ Lying due east of Jake, Mavotica is a fast-paced land of invention, academics, and magic well-known for leading the world in new discoveries both on and off world. This first-world society lays claim to aristocracies and grand libraries where the largest and most current collection of information in the world can be found, or so they say. Astronomy, mathematics, alchemy, and philosophy are a number of emerging fields many have taken interest in, propelling the civilization into a state of enlightenment. Large cities of the present time's most modern architecture, composed of great columns and heavenly spires, scatter the lands. King's and Queens in Mavotica are recognized as being fair and just in the grand scheme of things, doing away with archaic punishment and striving for social prosperity, Though it depends on the ruler, racism remains a prominent issue, and some of them still hold true to older ways of life. Although Mavotica thrives as a society, the land itself is scarce in resources, having been stripped and mined for centuries. Many Mavoticans saw better lives elsewhere in the world, leaving the shores of their homeland and making a new life in coastal cities of Oathhome, or among one of the many small islands throughout the great seas. One such movement of historical significance was the Odissaie, an ancient migration of Mavoticans to the new world in the West nearly one-thousand years ago, although, it is largely undocumented.

~Landscape~ An archipelago of mostly temperate and some subtropical climates. A larger mainland is concealed by dozens of smaller islands covered mostly by rock. A comfortable home, Mavotica enjoys warm, rainy summers and moderate winters of snow. Common green-leaf and yellow-leaf trees dominate the rolling ground periodically giving way to low-lying shield volcanoes and geysers. Minor volcanic activity is commonplace in Mavotica, but the mysterious nature of this phenomenon is only partially understood by practiced sorcerers and wizards whom can use their powerful magic to look deep into the ground.

~Creatures~ The people of this land make strides in any aspect of civilized society, and some have even begun to direct their energy into deciphering what lies beyond the confines of their world. Here you will find scholars, entrepreneurs, astronomers, scientists, alchemists, noble fighters, and mysterious magic users. Among these people consists a variety of races, some well-understood, and others less so. The commonly understood being humans, half-elves, and hobbits, but other less-accepted races of tiefling, dhampir, and dwarves live in hardship among one another.

~Culture~ Mavotica, likely renamed from pieces of an age-old language, is an ancient civilization revitalized into something new. Its traditions run deep in a history of tens of thousands of years, as do its passionate religions. Celebrations and festivals take place several times throughout the year, attracting thousands into the cities and keep morality stable. Architecture and art are both highly admired not only by professionals, but also by citizens and amateurs.

~Known For~ A monument named the Pinnacle Vahn Hope towers center-city in the great capital kingdom of Kestrian. It is a narrow, nine-hundred foot tall pointed spire with a base only fifty feet wide situated in the Garden of Transparency. Seemingly sculpted out of witherite, its perfectly smooth surface and massive scale leave most questioning its origin as no practical known method could construct such a structure. Legend says it was created by a young witch who believed it would draw magical energy to her and the land from the beyond, ensuring the long life of her homeland. The Pinnacle Vahn Hope draws many daily visitors who go to pray and spiritually connect.

Oathhome:
~Overview~ Found north of Jake, Oathhome is a land of honor, pride, and nature. It is vast and ancient place, where history is recorded not by the pen, but by spoken word though legend and storytelling. A thin sliver of the land along the southern coast is speckled with cities, all settled during a time of migration when denizens of Mavotica left in search of natural resources, but the rest of the land holds no large cities nor grand kingdoms. Found here are proud tribes, strong clans, and old societies of rich cultures who value tradition and strength. Oathhome is a land or warriors, hunters, and explorers where magic is practiced in unity with nature and only out of necessity, often by shamans or healers. Magic here is regarded to be a sacred right, passed down through blood lines and used as a privilege to benefit those near, such as the village. Most follow these beliefs, at times however, warmongers arise and choose to use magic to acquire power and wage war on other tribes and clans. Nearly all who are born in Oathhome remain in Oathhome, and though it is not forbidden to leave, it is highly frowned upon.

~Landscape~ Pine tress, clear lakes, streams, and rock formations blanket the vast wilderness where many tribes of different origin reside. With a temperate to sub-polar climate, it is the coldest and largest of the three continents in terms of overall land mass. The southern and mid regions of the continent experience brisk summer mornings and harsh winters with extensive forests, rock formations and foothills. The north, however, remains a tundra year-round with scattered trees, age-old glaciers, and mountain ranges that hide beautiful valleys.

~Creatures~ The people of Oathhome live lives of honor and spirituality, following an inherited system of chieftains and commonly worshipping the great Solar Spirit, Howallu. There is little concept of race in Oathhome; humans, dwarves, wood elves, and orc live distant from one another but peacefully so. There is a myth among Mavoticans that humanoid beasts like that of feline, wolf, and reptile walk the wilderness of Oathhome, but only a native would know for sure.

~Culture~ Oathens wear traditional furs and leather which is blessed when taken from the creature they come from. They battle hate and doubt with a deep religious faith, looking to the Solar Spirits in the sky for guidance and following the teachings of the mothers and grandmothers. The Solar Spirit, Howallu, is the most common religious figure among Oathhome natives. Howallu is believed to have once been a giant turtle who arose from the ocean and became the land, but then projected its spirit into the sky and became a dragon, living on forever.

~Known For~ A great struggle between man and nature itself, known as the Battle of the Living. Long ago, when early native Oathens began to populate and overtake the land, all matter of animals, beasts, and wildlife rose up against man to stop him from his cancerous influence. It was a brutal war of strength and magic on both sides, but it is told that at the peak of conflict, Howallu appeared and split the fight with a colossal fiery wall. As a result, the event created Basen Helena, the largest natural wonder in the known world. Today, it's an unreachable frozen rift valley concealed by glaciers in the heart of Oathhome. It is said the liquid water at its basin, called umellior, grants long life, and served as the catalyst for ending the war and teaching Oathen man the value of nature. The greatest of warriors are permitted to venture to Basen Helena, but many die trying to pass through the glaciers.

A treaty establishing a friendly trade agreement, but exclusive right to travel to, reside in, or settle Jake. The treaty was written by her majesty Queen Sophia III, the first ruler of Faern, and signed between four rulers  representing both Mavotica and Oathhome. It is said she conferred directly with Jake himself before he died on the matter of having the treaty written. The treaty allows for limited intercontinental commerce with Jake, but restricts immigration, settlement, and general travel to the continent in order to preserve the original state of the land. 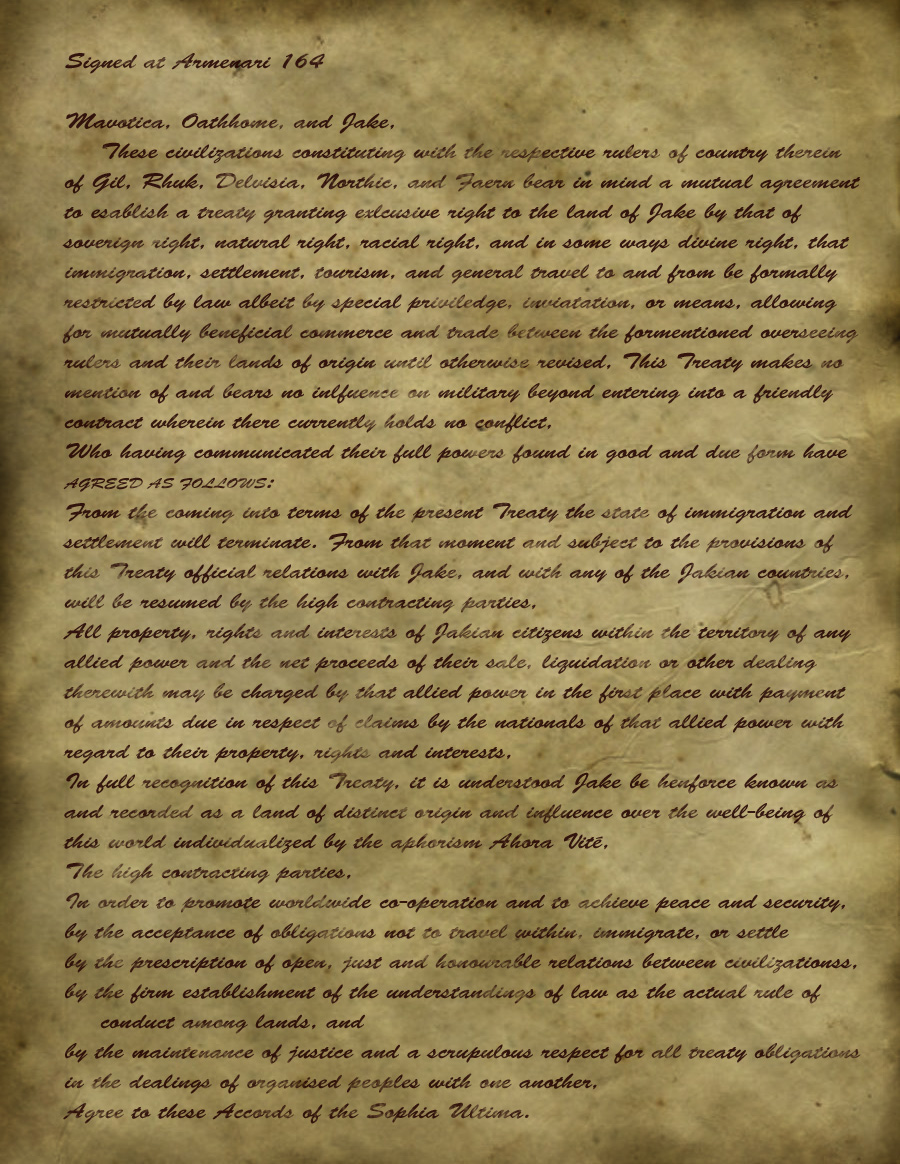 The Land of Jake

I'm sorry, but we no longer support this web browser. Please upgrade your browser or install Chrome or Firefox to enjoy the full functionality of this site.